Carpal tunnel syndrome, or CTS, is one of the defining ailments of our time. In the United States alone, nearly nine million people are diagnosed with CTS each year, nearly 3% of the total population. As jobs increasingly rely on repetitive motions such as typing, CTS threatens to grow even more prevalent.

Because it is so widespread, CTS gives rise to all sorts of speculation about its causes and treatment. This little guide seeks to set the record straight.

What is Carpal Tunnel Syndrome? 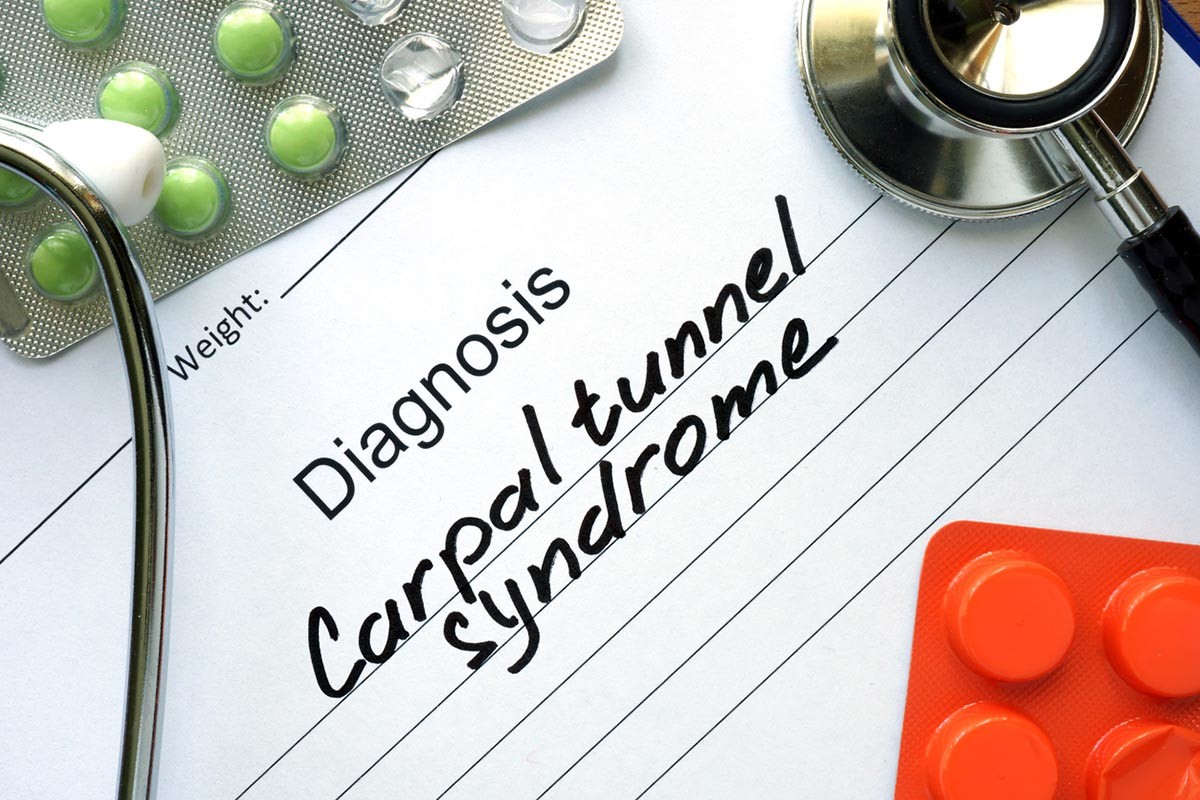 Before we define CTS, let’s look at the parts of the body it affects.

The fingers are controlled by four muscles, collectively called flexors, that run together along the length of the forearm. At the wrist, the flexors flatten out; past the wrist, they split off to join each finger, where they are connected at the first knuckle by tendons. Gripping items, flexing fingers, and performing tasks like playing the piano or typing at the keyboard all depend on these muscles.

Along with the flexors, the median nerve also travels down the forearm, through the wrist, and to the palm, where it branches out to control most of the fingers: the base and side of the thumb, the side of the index and ring fingers, and the middle finger. Together, the flexors and median nerve are responsible for much of the hand’s ability to sense and respond to its environment.

While passing through the wrist, the flexors and median nerve run through a channel called the carpal tunnel. This channel is composed of the wrist’s bones on three sides, and a ligament, the flexor retinaculum, on the outside of the wrist, facing the same way as the palm. When the flexors, median nerve, or flexor retinaculum are irritated by repeated usage and become inflamed, a pressure is exerted on the median nerve. Because the nerve is packed closely into a space bounded by bone and tough ligament, it cannot easily escape the extra pressure, and its function is impaired.

What are the symptoms of carpal tunnel syndrome?

Compressing a nerve can cause initial symptoms ranging from parathesia, or tingling, to sensations of cold, and then pain. Eventually, affected nerves can become deprived of oxygen, impairing their ability to relay messages. At first, this may result in numbness. If left untreated, the stretches of nerves beneath the wrist—those not receiving the signals intended for them—may atrophy and retreat. In these cases, it may take months or even years after successfully treating the cause of atrophy for new nerve branches to grow.

How can carpal tunnel syndrome be prevented?

While early-stage CTS can be treated without surgery, it’s best to prevent it altogether. Fortunately, the best preventive measures rely mostly on common sense.

Regular breaks from repetitive activities involving the wrist are the single best hedge against CTS. The flexors, nerve, and ligament responsible for CTS can take a good deal of stress before becoming inflamed, and your body knows how to handle the strain of repeated activity if only given the chance to recover. Resting for a few minutes every hour or two is enough in most cases; some professionals recommend waving the fingers vigorously and randomly before a few minutes of complete rest, just to introduce a bit of nonrepetitive motion to the wrist.

Proper ergonomics can greatly reduce the strain placed by repeated motions on the wrist. For keyboard users, the most important factor to consider is the angle of the wrist while typing: wrists should never be angled backwards while typing. If possible, the wrist should not be bent at all, leaving the back of each hand should fall in line with the forearm. If the wrist must be bent, a slight downward angle is usually fine. 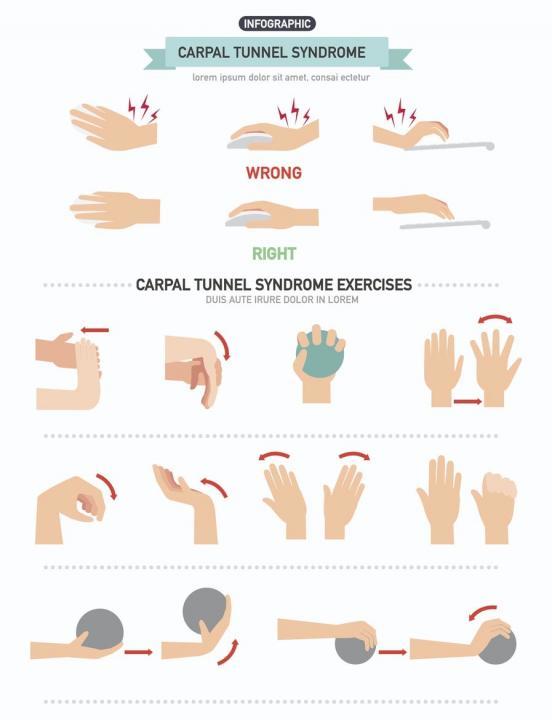 A surprising number of factors affect the wrist’s angle. The height of chairs and work surfaces can combine to throw wrist posture wildly out of true, or to help keep it in line. Poor overall posture, including a hunched back and tensed shoulders, can also cause wrist angles to drift into dangerous territory. Wrist rests and armrests can help keep typing hands in proper position, but not until the work area, and the posture of the person doing the typing, are properly established.

Manual labourers often find themselves placing high loads on wrists bent at risky angles. In a pinch, this usually doesn’t cause any damage, but when such motions are repeated regularly, they can invite CTS far more quickly than typing does. The same ergonomic rules apply to users of hand tools and heavy machinery as to keyboard users: get frequent bits of rest if possible, and make whatever adjustments are feasible to prevent backwards-bent wrists from performing repetitive tasks, especially under heavy loads.

These measures can go a long way toward preventing CTS, but they can also help stop the progress of CTS after it first manifests itself. Left untreated, CTS usually requires surgery. Adopting good ergonomic habits can delay or even obviate the need for surgery, buying patients time until they are able to give their wrists a sufficient stretch of complete rest. 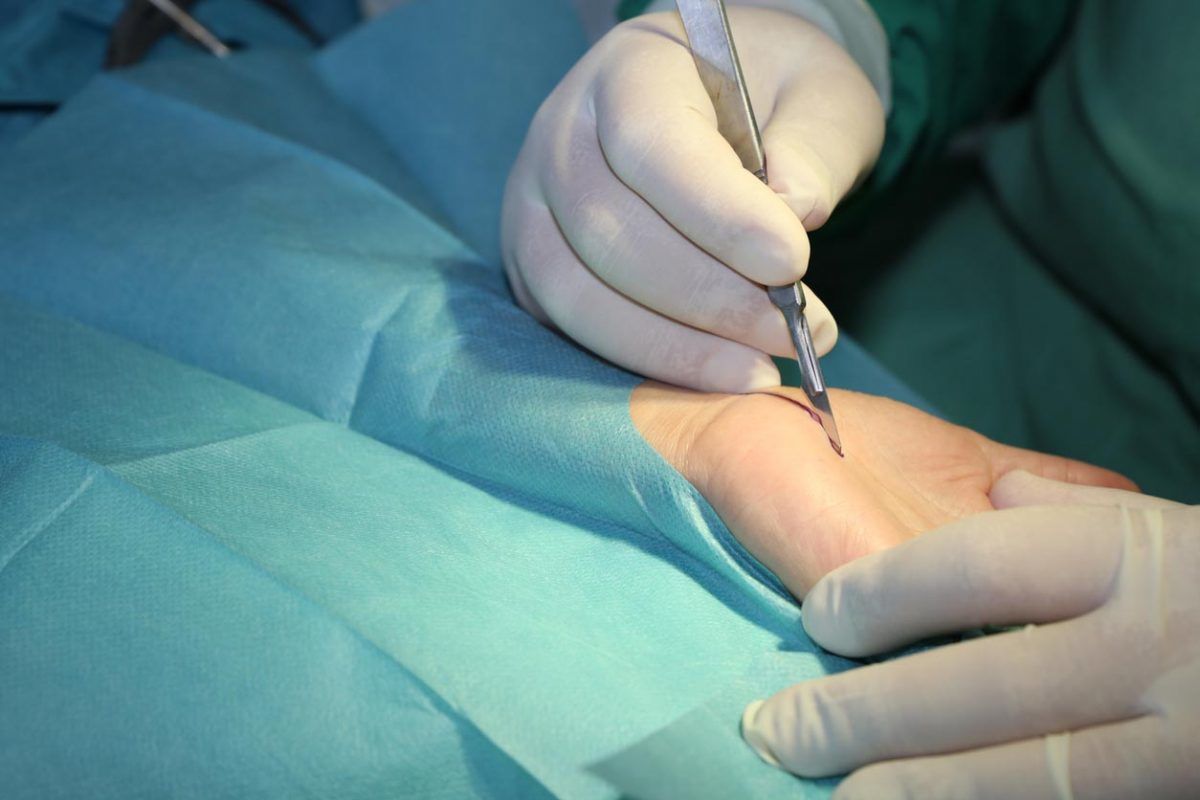 Why is carpal tunnel syndrome so common?

The easy explanation for CTS’ increased prevalence is that we type more than we used to. That’s not an entirely sufficient answer, though: manual labourers, not keyboard users, run the highest risk for CTS. It is likely that increased keyboard use tends to prevent already-overtasked wrists from recovering as they otherwise would. In any case, it has never been more important to develop and maintain the good workplace habits that keep CTS at bay.

To treat CTS, seek advice from a bone doctor or an orthopaedic surgeon.